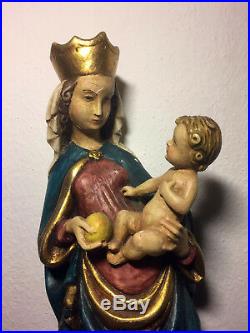 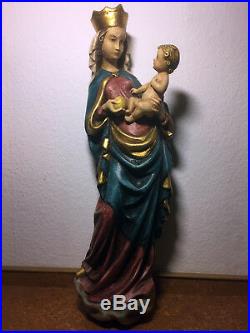 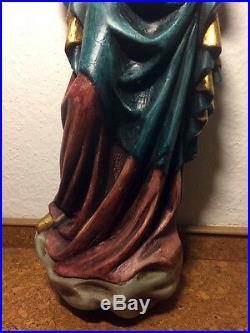 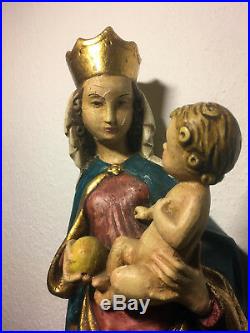 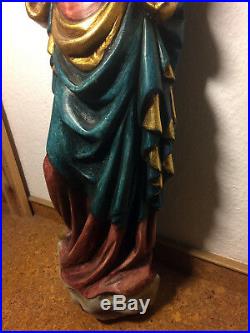 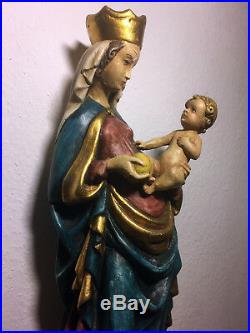 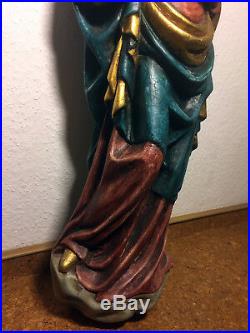 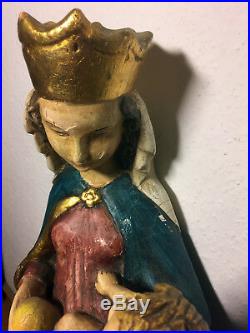 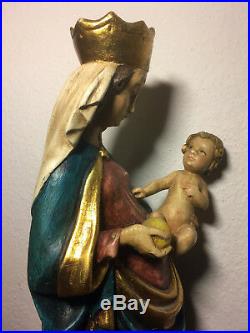 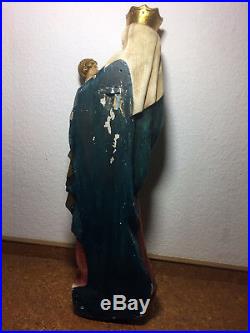 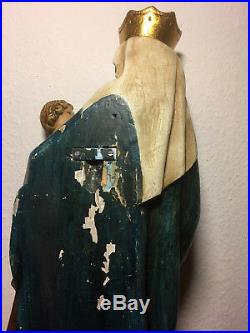 A few words in advance: My family and i are from Germany and collect sacred art in the third generation. It’s probably meant exactly for that and i can’t think of a better purpose than this. She is holding an apple. The apple as a religious symbol: An ambivalence characterizes the apple in depictions of Our Lady. In the hand of Mary or the baby Jesus, he can be a sign of the godmine. In contrast, in the Eve-Maria antithesis he is a symbol of seduction. The positive interpretation first gives the interpretation of the Song of Songs: the apple is compared with the bridegroom; Apples are supposed to bring the bride to sleep. Elsewhere, the apple is praised in the Old Testament for its golden color and delicious fragrance. Even the ancient world appreciated the apple for its beauty and sweetness. Here as in the Old Testament is not always clearly distinguishable between the actual apple and fruits such as quince and pomegranate. An important starting point for the Christian symbolism of the apple is the comparison in the Song of Songs with the Bridegroom, which is interpreted in the exegesis as Christ: According to Ambrose, Christ, who hangs on the wood of the cross, resembles the apple of the Song on the tree; he is the apple refreshing the Sponsa Ecclesia. Origen applies the apple equation to the people: apple trees are the souls that renew themselves daily in the image of Christ. An extremely common attribute is the apple in depictions of the Madonna and Child from the 12th century to the Renaissance. Rupert von Deutz combines the idea of?? Minne with the Eve-Maria antithesis. The apple is associated with the ominous fruit of the fall of man: He came into my garden and ate the fruit of my apple-trees, not as Eve invited her companion, I invite my beloved, who invited her companion to eat the apple that did not I invite my beloved… Not stranger, but to eat fruit from his apple-trees, the fruit he says with the words: My food is to do the will of my father. The Bible does not call by name the forbidden fruit that Eve plucked and passed on to her companion; the Genesis account of the Fall of Man only speaks generally of the tree of knowledge. Possibly the Latin word “malum” = apple and “sometimes um” = evil favored the interpretation that the apple was the fruit of original sin. For other reasons, the fig tree and vine were at times regarded as the tree of evil. The performance of the apple is therefore an indication of the work of salvation necessary for the fall. As second Eve, Mary Christ, the second Adam, gives the fruit that becomes the pledge of salvation from the sign of disaster. Since death came into the world with original sin, the apple is also a death-image. The lushly growing apples on the tree of knowledge become skulls in Eve’s hand; But Mary picks the crucifix from the same tree. Eva picks the deadly fruits, Maria hosts the apple tree. With the emergence of the Baroque images of the triumphant Mother of God as conqueror of the serpent, the symbolism of the apple is finally fixed on the negative. The mystical meaning of the fruit is lost. The baby Jesus now carries the globe in his hand, while the apple or an apple branch appears in the throat of the defeated serpent as a sign of sin and destruction. Details about it: Dimensions: 30 in H / 75 cm H Weight: 4.4 kg Materials and Technique: hand carved out of the finest basswood characteristic features: very fine and detailed carving Technique used surface: painted and gilded by hand. It seems as if it was once restored. If you take a closed look at her face, the color seems fairly new but old limescale beneath it. Place of Origin: made at the Black Forest in Germany Date of Manufacture: Unknown Condition: Very good condition. But please take a closer look at the pictures for the exact condition. Wear: Wear consistent with age and use. The item “Vintage wooden carving wall madonna Our Lady Mary of the apple & Jesus statue” is in sale since Friday, December 15, 2017. This item is in the category “Collectibles\Religion & Spirituality\Christianity\Statues & Figures”. The seller is “kiky2306″ and is located in Riedstadt. This item can be shipped worldwide.